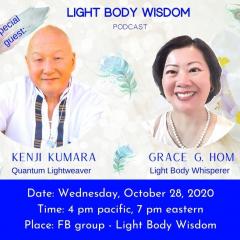 Some of you may already know Kenji Kumara, Quantum Lightweaver.  He's been on over 50 telesummit interviews so it would not surprise me if you have already heard of him.
Here's Kenji's bio:
Kenji Kumara, affectionately known as The Joyful Soul, is recognized worldwide as an energy healer, life coach and dynamic keynote speaker. He is also a quantum lightweaver, empowerment catalyst, ambassador of peace, consciousness shifter and divine messenger.
Kenji is one of the leading healers in Asheville, NC. He acts as a bridge to the quantum and serves as a facilitator for those ready and open to receive divine, unconditional love connected with the power to create the reality of their choice, in grace and appreciation.
At age 5, Kenji asked his mother, “Who Am I?” and when she replied, “You’re Japanese!” he walked away realizing his parents, although loving and kind, were unable to help him with this question and thus, his journey and search for the truth began.
Kenji always had the “calling” to be in the healing and consciousness arts and began by studying metaphysics in his first year of college at age 23. His journey was one of trust and having faith in God.
Having studied with some of the leading-edge thinkers of our time, it took Kenji almost four decades before he left his last teacher and went out into the world to share what he knew.
Kenji integrated his studies of spiritual psychology, medical hypnotherapy, holistic education, trans-personal counseling and the transformational healing arts and created a system that produces quick and gentle on-going shifts in consciousness, mind, body and emotions. His practice of Quantum Lightweaving (R) and Sedona Vortex Activations (TM) is one that anyone can learn.
Upon attending one of Kenji’s intensive retreats and online series, many have reported profound life changes and clarity with on-going benefits such as stress relief, reversal of physical conditions and reduction or elimination of worry, anxiety and self doubt.
Known for his ability to keep it simple, effortless, and easy with his humorous and playful style, Kenji continues to attract those in search of higher-awareness and self-mastery. He has been highly praised for his unique ability to help people understand their life’s purpose and claim their true destiny.
Kenji, a Japanese-American born in Berkeley, California, lives a simple yet exceptional and fun-filled life in North Carolina where he thoroughly enjoys teaching, gardening, being in nature and allowing his inner child to come out and play. Kenji is an unassuming, soft-spoken and kind soul who loves making people laugh.