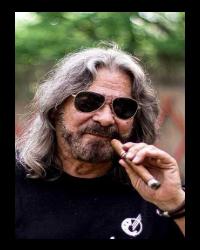 Lance Henson poet, author, Native rights activist and educator. Henson is famous for his poetry which is known for its powerful imagery, brevity and universal appeal.

now lives in Italy, but he grew up in Oklahoma where his grandparents raised him in the traditions of the Cheyenne tribe. He has published 28 volumes of poetry, which have been translated into 25 languages. He has been described as the "foremost Cheyenne poet now writing."